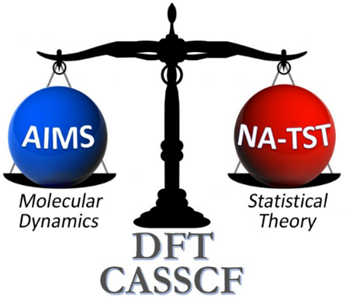 The research in our group is mainly focused on chemical kinetics and dynamics of spin-dependent nonadiabatic processes, including intersystem crossings, spin crossovers and spin-forbidden reactions. Spin-forbidden processes play a central role in different areas of science. For example, in photophysics, these processes often determine the lifetime of electronic excited states participating in the conversion of light to electrical energy. The magnetic properties of materials used in the development of sensors, displays and information storage devices, can be controlled by light, temperature or pressure, by initiating spin-forbidden transitions between electronic states. Our group has demonstrated that spin-forbidden processes could be responsible for a unique catalytic activity of metal-sulfur proteins, which has important implications for the development of bioinspired catalysts that are based on earth-abundant transition metals.

We are developing theoretical and computational methods that are capable of accurately describing spin-dependent processes in which transitions between electronic states with different spin multiplicities are mediated by spin-dependent couplings. We use these methods to advance fundamental knowledge about spin-dependent processes in different areas of molecular science, from formation of oxygen-bearing molecules in space to catalytic reactions on metalloenzymes. We also collaborate with experimental groups on determining the properties of known and newly synthesized molecules by using our expertise in electronic structure theory.