Agricultural Production and Water Use in Case Study Basins

We are interested in understanding how agriculture producers will respond to changes in the timing and quantity of water flows. Through this research, we hope to learn how agriculture producers' decisions regarding land use, crop choice and water use will be impacted by these climate-induced changes. Our two case study areas are the Walker River Basin in NV/CA and the South Platte River Basin in CO/WY/NE. 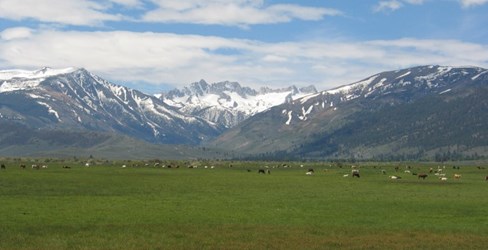 The Walker River Basin includes parts of Lyon, Mineral, Douglas, and Churchill Counties in Nevada as well as Mono County in California. Lyon and Mineral counties are where nearly all water for irrigation from Walker River is used for agriculture. In these two counties, total agricultural sales were over $100 million in 2017. Much of this comes from cattle operations, which comprise over two thirds of total sales. Around 40 thousand acres of cropland are irrigated, and just over 100 cattle operations are run in the basin.

Water use in the basin is dominated by irrigation, with the largest use coming in Lyon County, which alone produced over $100 million in agricultural sales in 2017 (note- not all of this is produced from water from Walker River). Domestic use and mining are a distant second and third in water use. A growing portion of water is used for environmental instream flows in support of recovery initiatives at Walker Lake.

The South Platte River Basin comprises 23 counties in Colorado, as well as parts of Wyoming and Nebraska. The three largest agriculture producers in the basin are Weld, Yuma and Morgan counties, all located in the northeastern part of the state. While the research considers all these affected counties, only the three largest producers are shown here for the sake of space. The three counties had a combined $3.5 billion in sales in 2017. Around 80% of this comes from livestock. Weld County is the largest producer, with over $2 billion in sales from roughly 4,000 farms and over a half million cattle.

The majority of water use in the S. Platte is for irrigation, while public, industrial and mining make up smaller portions to varying degrees in the different counties.

Water Use in Case Study Areas