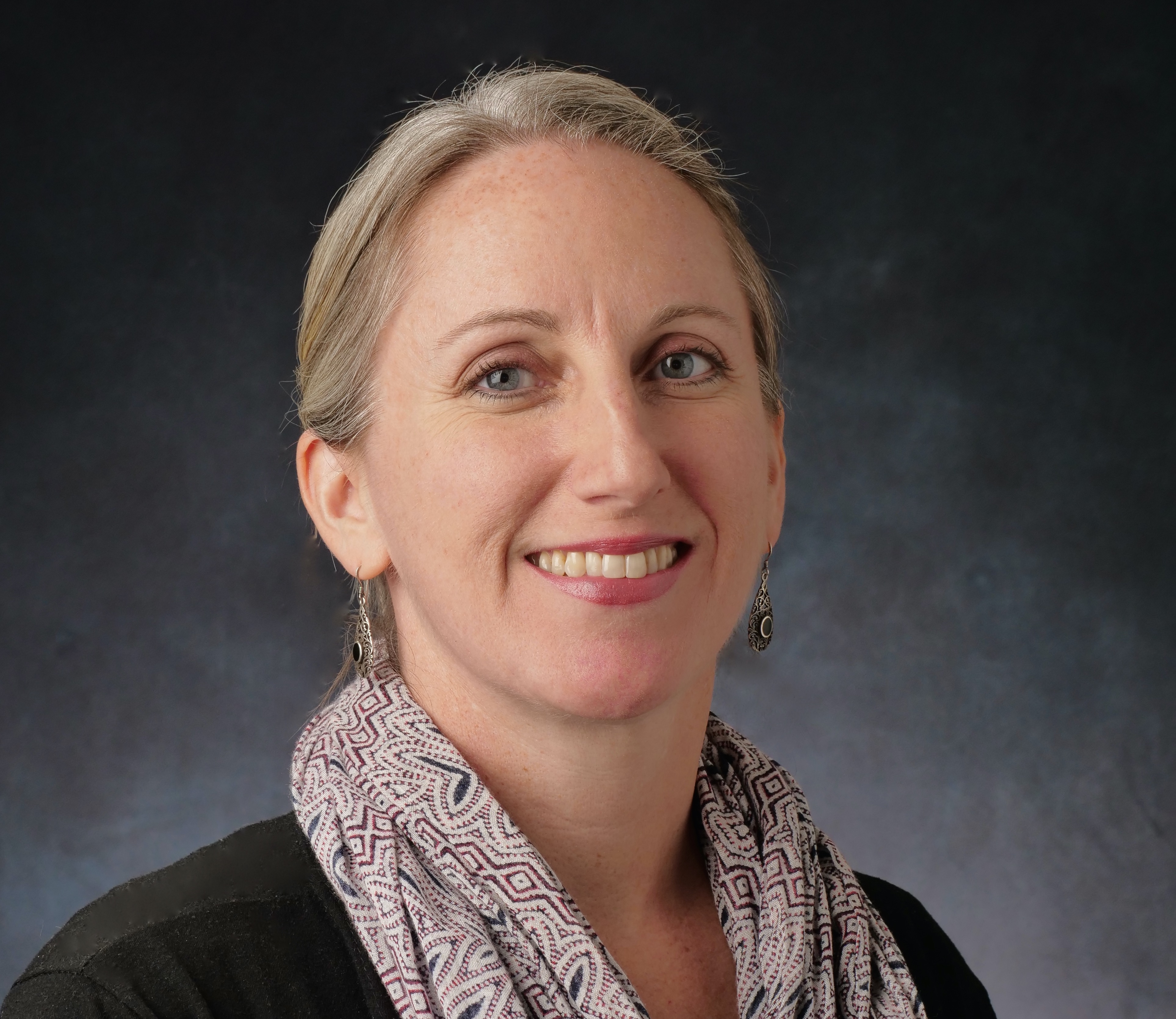 Jennifer Cullison is the director the RUIOH Project at the University of Nevada, Reno (UNR).

Cullison is a specialist in U.S. history and global issues of race, migration and citizenship.

By invitation of the University of Pennsylvania Press, Cullison is preparing a manuscript proposal titled "Spawning a Hydra: The Policy and Practice of Immigrant Caging in Postwar America." The monograph will explore the growth of immigrant detention writ large in the U.S. since World War II – i.e. the growth not only of Immigration and Naturalization Service (INS) and then Immigrations and Customs Enforcement (ICE) detention, but that of all forms of human caging related to U.S. immigration policy.

A key part of the work, her detention policy history, reframes historical understanding of the rise and institutionalization of immigrant detention. Her case studies then focus on immigrant detention, detainee experience and related grassroots organizations in south Texas including Port Isabel, Brownsville, McAllen and Laredo. She using national, state and organizational archives and collections from Mexico and the U.S.

Some highlights of her public-facing work are:

And recent publications and talks include: 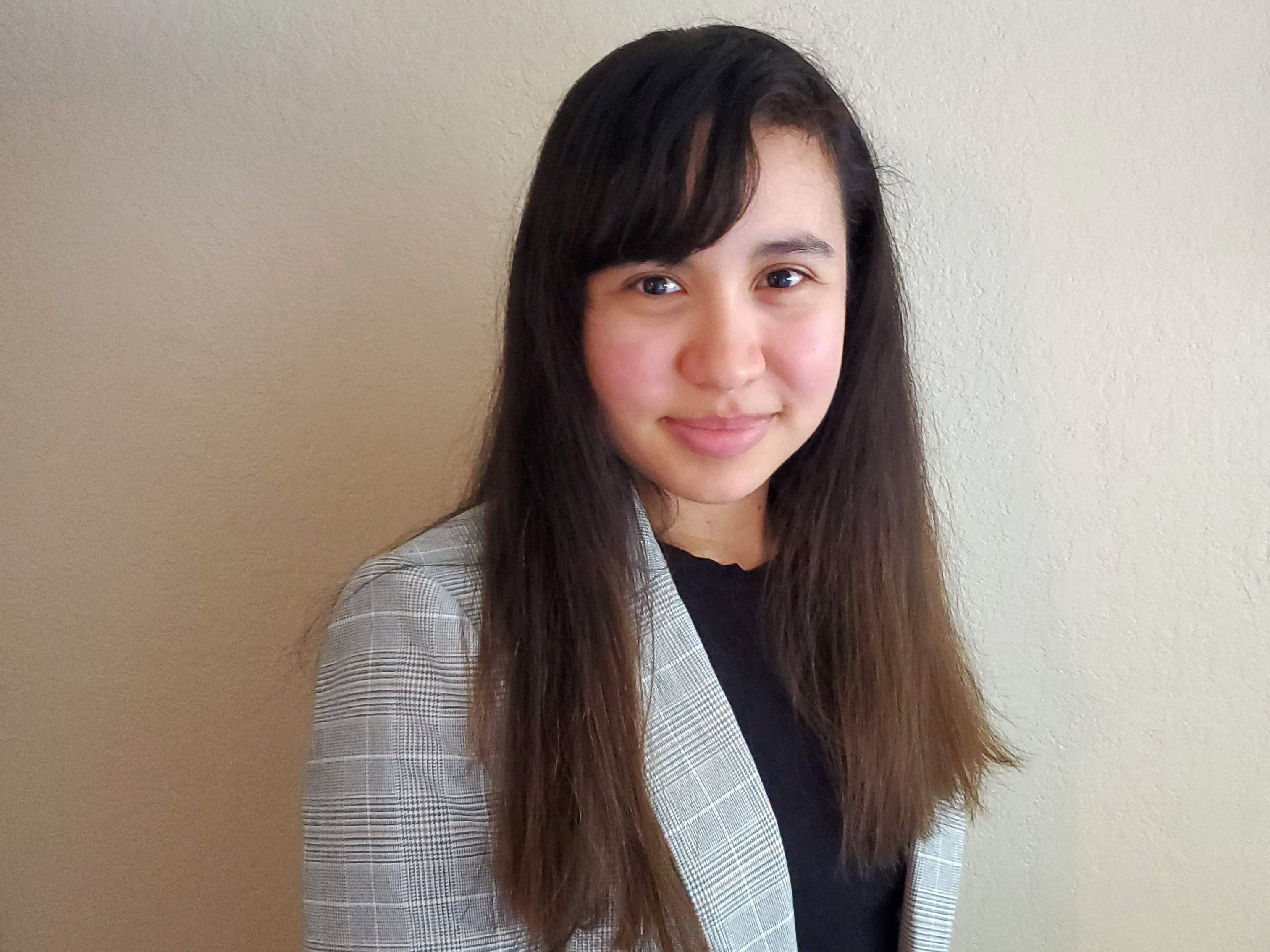 Mariana Delgado Ceniceros is a lead interviewer, translator, and transcriber of undocumented migrant stories for the RUIOH Project at the University of Nevada, Reno (UNR) for Fall 2021 and spring 2022.

She is a second-year undergraduate student at UNR. She is currently majoring in Management with a double minor in Dance and Human Resources.

Mariana lived in Mexico as a child, where she developed a love for her family’s culture. Determined to dominate the Spanish language, Mariana would practice reading, writing, and speaking the language at home while also taking classes throughout high school and obtaining the seal of Biliteracy issued by the state of Nevada.

When she is not studying, Mariana is passionate about volunteering and giving back. She was a teen assistant at the Terry Lee Wells Discovery Museum, where she worked closely with many different families. She and her family also like to raise money to donate to various charities in Nayarit, Mexico, including elderly shelters, homes for abandoned children, and animal rescues. 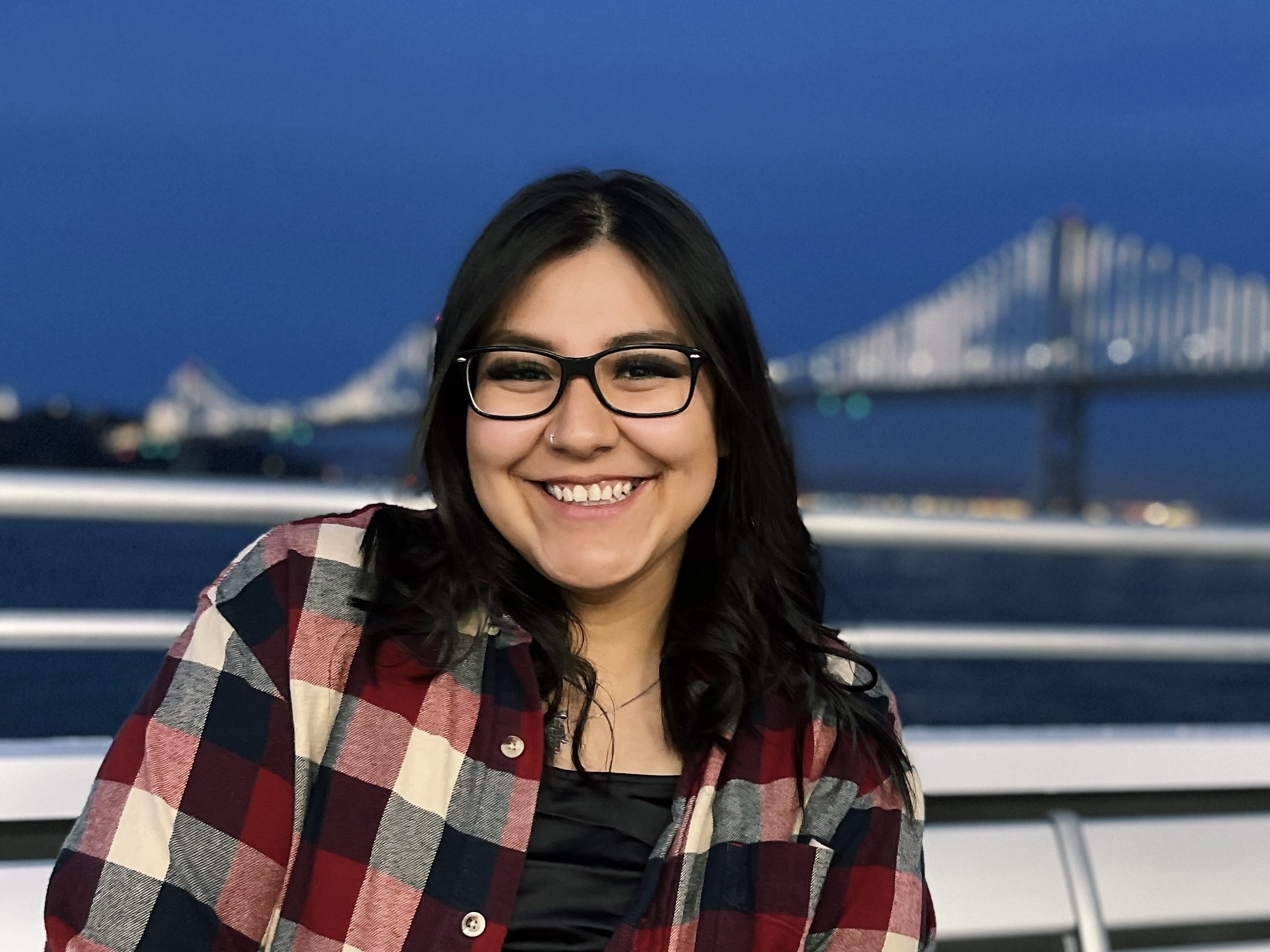 Laura Santiago is a volunteer interviewer for undocumented migrant stories for the RUIOH Project at the University of Nevada, Reno for Fall 2021 and Spring 2022.

Santiago is a master’s Graduate Student in the Communication Studies program at the University of Nevada, Reno. She is currently enrolled in her first semester and plans to work closely with the Latinx undocumented and DACAmented community to tell their narratives and examine the way in which citizenship discussions influences their relationships and identity. Through her work, she hopes to find and develop innovative and creative ways to address these communication concerns as well as identify and establish systems of support for the community.

In 2019, Santiago received her bachelor’s degree in Communication Studies with a minor in Psychology from Augsburg University in Minneapolis, MN. During her time there, she worked closely with Dr. Jenna McNallie to propose and conduct a qualitative study titled “Being DACAmented: How Families of Undocumented Young Adults Talk About Citizenship.” This study explored when DREAMERS found out about their undocumented status prior to having DACA, the way in which their family discussed citizenship, and how the discourse had changed over time in their family. Santiago’s work was awarded Top Paper Panel at the 2020 Undergraduate Honors Research conference for the Central States Communication Association in Chicago, IL but the meeting was cancelled due to COVID-19 safety concerns.

Laura is excited and passionate about continuing her work with her community at the University of Nevada, Reno. She looks forward to exploring her local Latinx community and further exploring how discourse around citizenship impacts our families and how to best address these concerns in a way that is beneficial and uplifting to the community. She is also looking forward to connecting with organizations with similar goals and ambitions and working with community members who are paving and leading the way to change. 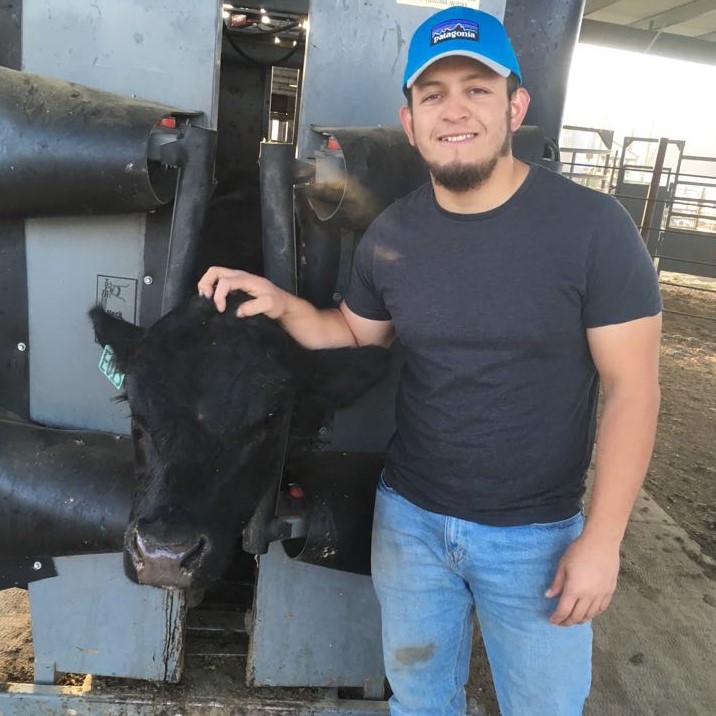 Arturo Macias Franco is a volunteer interviewer for undocumented migrant stories for the RUIOH Project at the University of Nevada, Reno for Fall 2021 and Spring 2022.
Arturo is a graduate student at UNR. Arturo completed his undergraduate studies at UNR in Veterinary Sciences and Agriculture, he defended his M.Sc. in Animal and Rangeland Sciences and is now a Ph.D. student in the Animal and Rangeland Sciences program also pursuing a M.Sc. degree in Statistics and Data Science. Originally from an agricultural hub of northern Mexico, his research incorporates mathematical models to increase productivity and sustainability of agricultural production systems especially related to water. Arturo seeks to help resolve and address agricultural and biological dilemmas through his research. 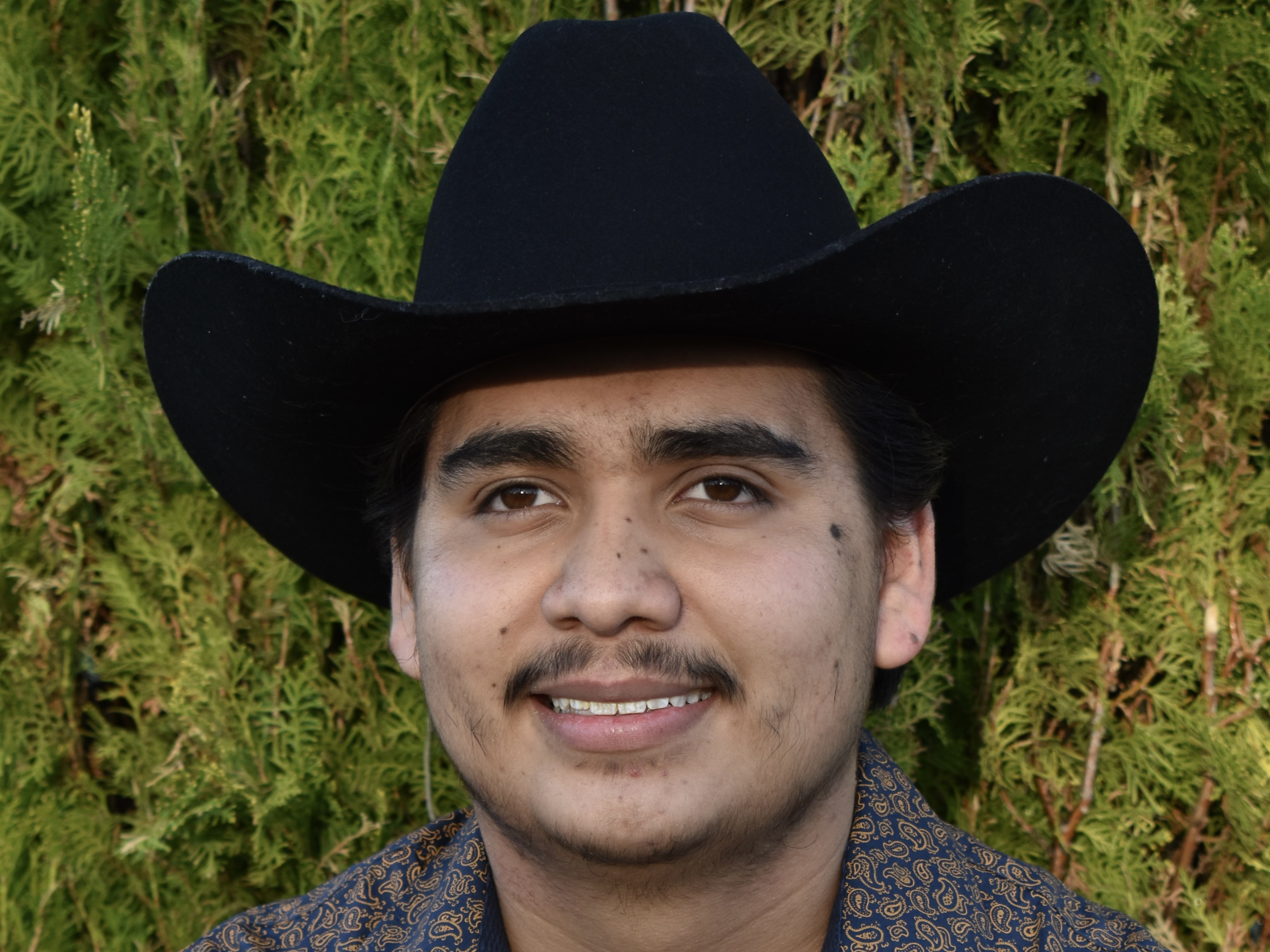 Gary Cortes Solis is a volunteer interviewer for undocumented migrant stories for the RUIOH Project at the University of Nevada, Reno for Fall and Spring 2021.
He is a second year undergraduate student at UNR. He is currently majoring in Microbiology and Immunology with a minor in Spanish Language, Culture, Literature and in Analytical Chemistry. Gary's parents are originally from Mexico, however, Gary was born in Martinez, California and has lived all his life in the State capital of Carson City, Nevada. Gary understood the importance of having a strong understanding of Spanish as he knew it could aid him in his future. In high school he received the seal of biliteracy by the Board of Education in Nevada and has continued his education at UNR.
He also hopes to one day attend medical school and become a Family Medicine Physician to help those who are underserved in the state of Nevada. He loves the state and wishes to have a future here. During his free time he volunteers with organizations such as High Sierra AHEC as a Student Ambassador, as an interpreter for the Student Outreach Clinic run by the University of Nevada's School of Medicine. He was also involved on campus with various clubs such as Medlife, AMSA, and Phi Delta Epsilon and is currently employed as a peer pre-professional advisor for the Exploratory & Pre-Professional Advising Center.
Gary joined this project because he feels that he could make an impact on his community that could be long lasting and hopes to relate to his future dream career as a Family Medicine Physician. He has personal experience of interpreting for those who speak predominantly Spanish and those who are undocumented and accomplying them to their doctor's appointments thus understands how being part of a project like this will help grow as a person. 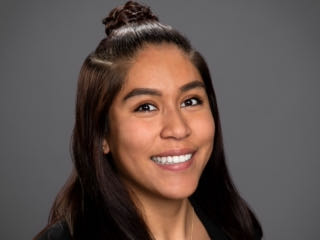 Melanie Mendez was a lead interviewer, translator, and transcriber of undocumented migrant stories for the RUIOH Project at the University of Nevada, Reno for Fall 2021.

She is a senior undergraduate student at the University. She’s currently majoring in Journalism with an emphasis in Spanish Language Media and minoring in English Literature. She plans to graduate in the Spring of 2022.

Although Melanie’s parents are originally from Mexico, she was born in Reno, Nevada and eventually moved to Las Vegas where she completed the International Baccalaureate program in high school. As a first generation child of immigrant parents, Melanie spent the majority of her life translating for her parents while also helping them and eventually her sisters with important documents. Growing up in a bilingual household greatly increased her vocabulary skills and influenced her career of being a bilingual media reporter.

Mendez is passionate about her journalistic work and displays it through her job as the Spanish Language News Editor for the Nevada Sagebrush on campus. She hopes to one day work for a major Spanish news network such as Telemundo or Univision writing articles on the marginalized Latinx communities around the nation. Mendez envisions herself bringing light to issues that most news channels often ignore in hopes of influencing changes that will one day come to benefit the underserved of those communities.

During her free time, Mendez often finds herself spending some much needed play time with her puppy Sugar or binge watching Gordon Ramsay’s Kitchen Nightmares. It also isn't uncommon to stumble upon her doodling in her planner. She also prides herself in knowing a majority of the Nacho Libre movie script. 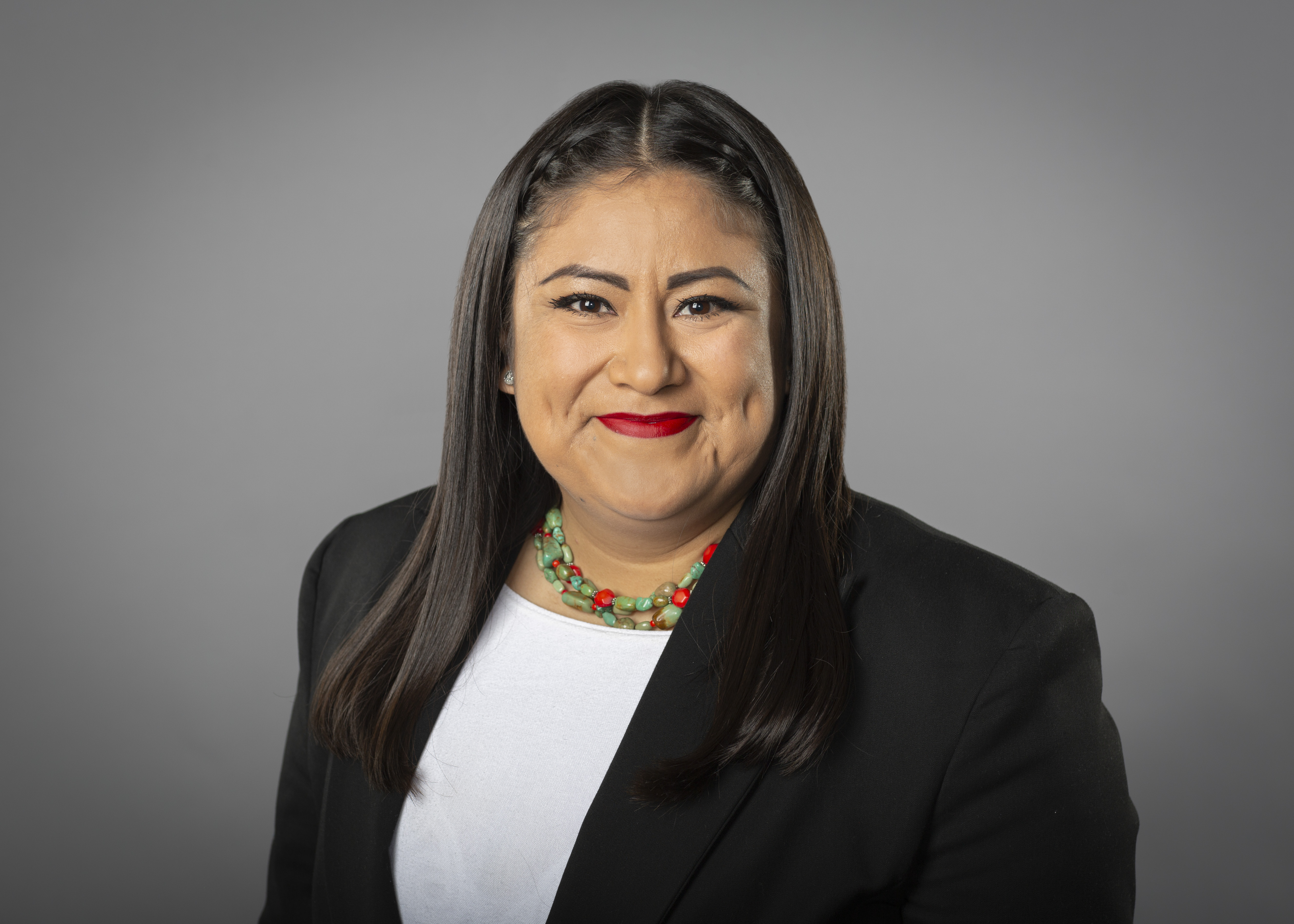 Susana Ramirez was a lead interviewer, translator, and transcriber of undocumented migrant stories for the RUIOH Project at the University of Nevada, Reno (UNR) for Spring 2021.  They also work for the President’s office of Diversity and Inclusion: Democratic Civic Engagement at UNR.

They are a Master’s Graduate Student in the Sociology program at the University of Nevada, Reno. Ramirez is currently developing their thesis which is focused on indigenous women and social movements in Chiapas, Mexico. During their first year as a graduate student, they served as a presider for the 115th American Sociological Association Annual Meeting titled: Power, Inequality, and Resistance at Work.

In 2017, they received a dual Bachelor’s degree in Sociology and Women’s Studies from the University of Nevada, Reno. As an undergraduate, they were a part of various clubs such as the Reno Justice Coalition, MEChA, among others. As a high school student, they received the Excellence in Spanish Proficiency award and an advanced diploma.

In the past they have been a guest lecturer for several undergraduate classes at both the University of Nevada, Reno and the College of New Caledonia, British Columbia Canada. They have also worked for several local community organizations such as the Women and Children’s Center of the Sierra, Step2, and the Community Service Agency. As well as received several accreditations such as, the Domestic Violence and Sexual Assault Prevention Certificate by National Institute of Crime Prevention, the Certificate for Historical Trauma, Trauma and Resilience in Indian Country by the Fallon Paiute/Shoshone Tribe’s Mental Health & Substance Abuse Program and the “Domestic Violence Response” certificate by the Washoe County District Attorney’s Office.

They are passionate about, social justice, the environment, and helping uplift their community. In their free time, they like to volunteer at soup kitchens, and DJ a local radio station. 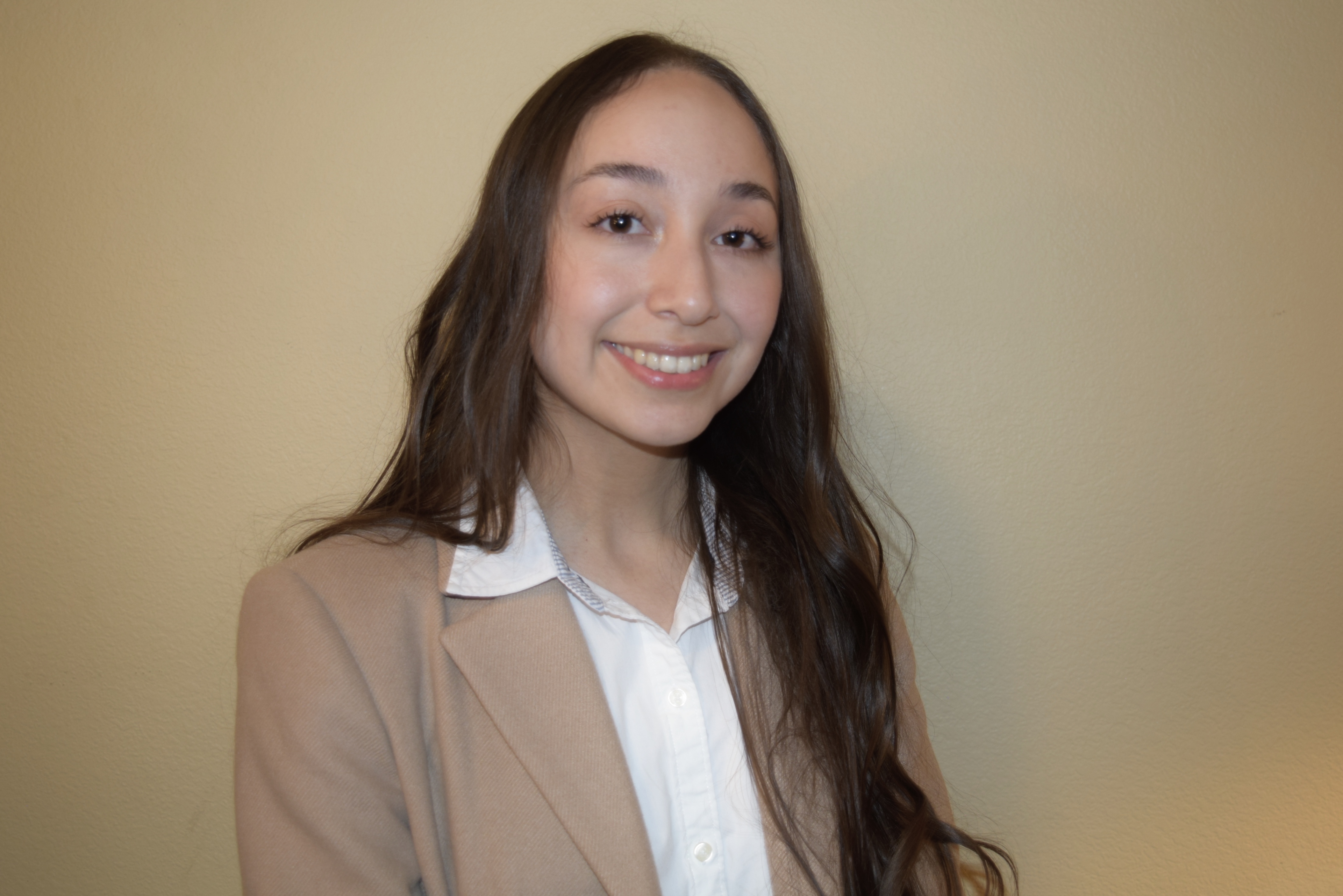 Jessica Guzman was a lead interviewer, translator, and transcriber of undocumented migrant stories for the RUIOH Project at the University of Nevada, Reno (UNR) for Spring 2021.

She is a fourth-year undergraduate student at UNR. She’s currently majoring in Microbiology and Immunology with a minor in Spanish Culture.

Although Jessica’s parents are originally from Mexico, she was born and raised in Reno, Nevada where she had the opportunity to learn how to speak in English at a young age.  Jessica knew the importance of maintaining her Spanish, so she made sure to take Spanish classes throughout high school and volunteer in places where it would allow her to improve her language skills.

Guzman is passionate about volunteering and helping others in the community.  She has interned for the Latino Research Center at the University of Nevada, Reno and has gone on a service-learning trip to Lima, Peru, where she was able to provide medical care to communities in need. She continues to volunteer with MEDLIFE Nevada, her local church and as an interpreter for the Student Outreach Clinic run by the University of Nevada’s School of Medicine.