The Vowels In America (VIA) project illuminates speech patterns in the United States; how we speak and how we hear what others’ say – in particular, variations across regions and time. VIA is a study made possible by grants from the National Science Foundation (NSF #BCS-0518264 and BCS-1123460, PI Fridland and BCS-1122950, PI Kendall).

There are three main components of the project: 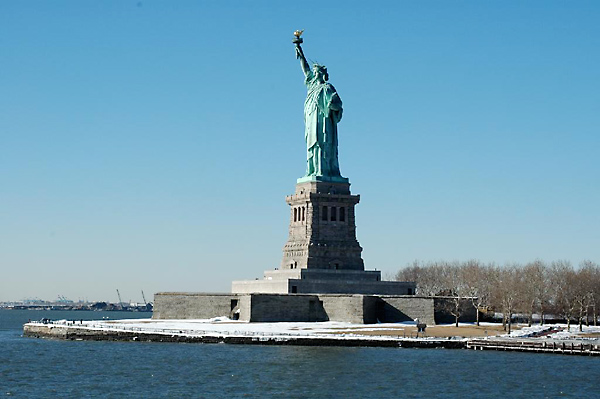 Participants in the research have volunteered at seven field sites, across each of the three main U.S. dialect regions; Northern, Southern and Western. The sites are:

Participants took an online vowel perception test which asked them to categorize the different vowel sounds they heard (e.g. does this word sound like “bet” or “bait”?) and a subset of these participants in each region also recorded a speech sample that allows us to measure how they themselves pronounced vowel sounds. 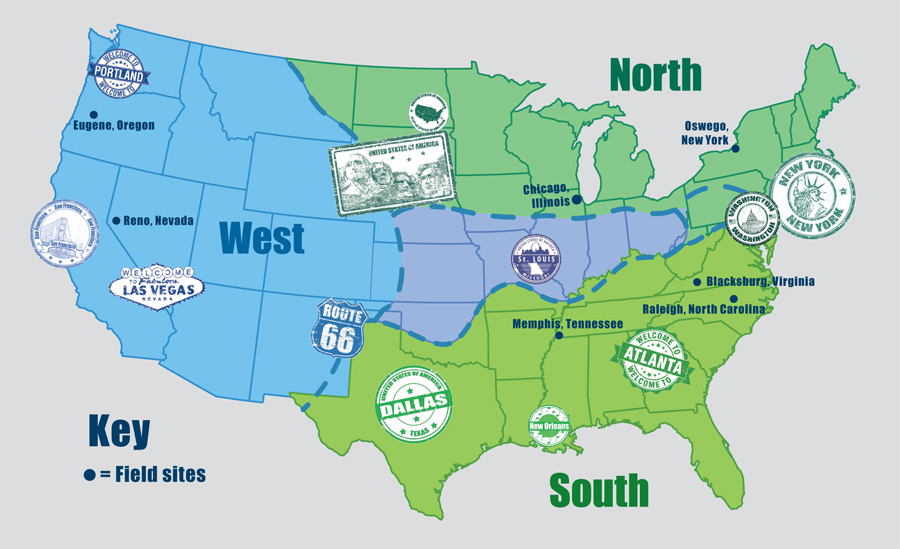 Map showing main dialect regions and initial VIA Project field sites. Please click on the map to enlarge it.

Differences in speech production and perception

VIA seeks to determine if speakers from the same region are more similar to each other than to speakers from other regions, even if there are notable variations between particular locales. The project also examines how different vowels are produced and perceived across regions. The last part of this question is whether distinct speech patterns of an individual play a more significant role in what they say and hear than their broader regional affiliation.

While it probably doesn’t surprise anyone that vowels are pronounced differently by people depending on what part of the country they are from, it likely will surprise you that vowels in U.S. regional dialects appear to be moving farther apart in terms of how they are produced. In other words, how we sound when we make vowel sounds is changing over time – and these changes differ depending on which region you are from. In addition, social facts, things like age, ethnicity and gender, also make a difference in how fast or slow these changes are picked up and spread.

Take a listen to these three speakers from the speech accent archive to compare how vowel sounds are made across U.S. regions (from Weinberger, Steven, 2015. Speech Accent Archive. George Mason University. Retrieved from http://accent.gmu.edu) 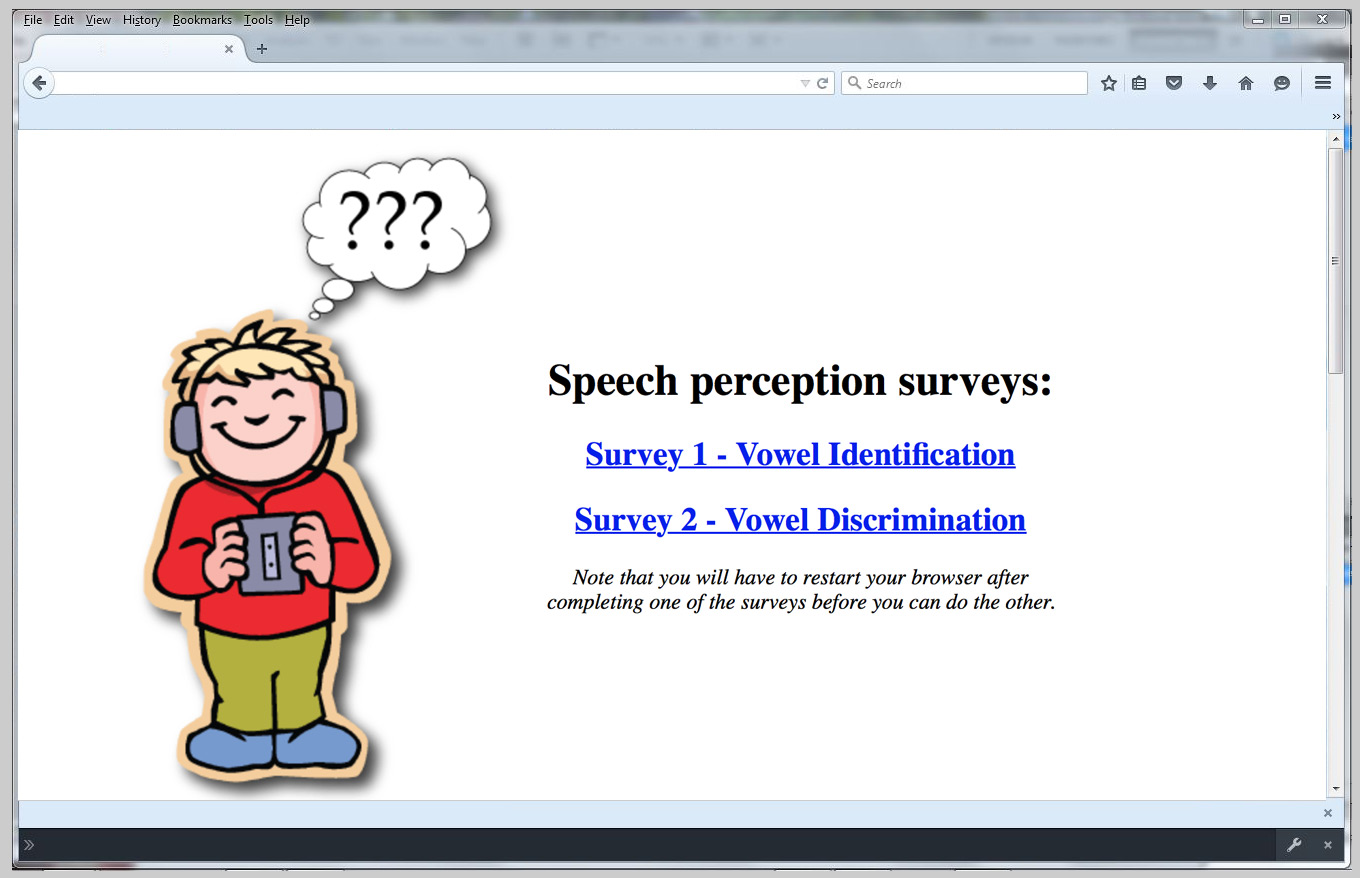 Distinctiveness in vowel production is known as vowel shift

Regional differences across American dialects are widely recognized and mark historically and enduringly significant divides due to settlement, migration, and ethnicity, among other factors. Despite increasing mobility and contact among regions, most recent studies have shown that speech in the U.S. is being affected by a number of shift patterns that lead to greater distinctiveness in how vowels are realized phonetically in the (Inland) North, the South and the West. There are several good websites that can tell you more about these shifts and that have schematics you may want to consult as you read through the text that follows. We suggest “Do you speak American?” If you are interested in reading more about the regional dialects of English, you may also want to visit the home page of the TELSUR project.

Changes in vowel sounds are linguistically very significant as there is only limited space in the vocal tract for producing distinct vowel sounds (roughly created by different tongue positions in the mouth) and if the pronunciation of one vowel changes, it can affect how other vowels are pronounced to remain distinct from that shifted vowel. This limitation of possible vocal tract configurations for the production of vowel sounds creates the potential for a domino effect, as one vowel’s pronunciation begins to shift, it overlaps the pronunciation of other vowels, creating a chain reaction of shifting vowel sounds. This synchronized rotation in vowel space has been termed a chain shift. Current research on American dialects has shown that U.S. dialects are affected by several chain shift processes, with each major region differing in the types of changes and the social groups affected by the sound changes.

The Northern Cities Shift (NCS) is an acoustic difference in the way that the short front vowels and the low back vowels are pronounced in the Inland North. We find most European-American speakers in Northern urban areas such as Chicago, Cleveland, Syracuse and Buffalo have vowels that have moved acoustically in the direction of this shift pattern. As a result, “bed” sounds more like ”bad” to a non-shifted speaker, though it is still understood as ”bed” to a Northerner.

In contrast, speakers in the South show vowels affected by what has been termed the Southern Vowel Shift (SVS). The Southern Vowel Shift is characterized by changes to the long and short vowels found in words such as beet, bit, bait and bet, changes that actually are in stark contrast with how these vowels are changing in the urban North. For a speaker affected by the Southern shift, a word like bed with this shift will sound more like “bay-ud” to a speaker from elsewhere. Again, the new pronunciation is an acoustic change, meaning the shift doesn’t alter the vowel category the speaker intends. 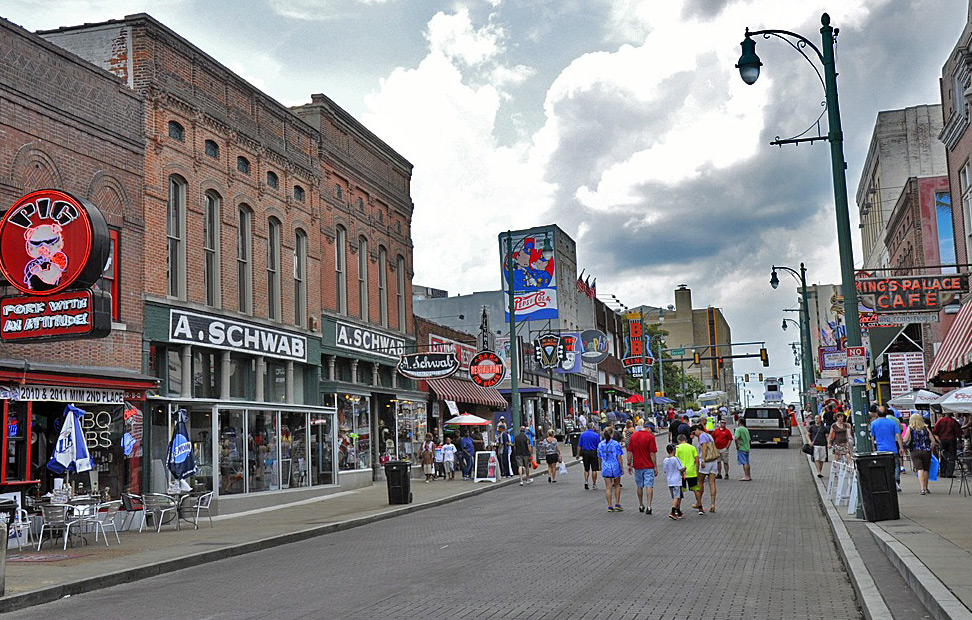 In the South, however, it is mainly rural speakers that are affected by these changes. Though older urban speakers show some evidence of this shift pattern, younger urban speakers appear to be retreating from the shift.

In addition, a highly stereotyped feature of the South is the so-called Southern drawl. This ‘drawl’ actually has to do with differences in the length (duration) of the vowel sounds produced by Southern speakers compared to speakers from other areas. Though some previous research points to measurable differences in duration across regions, it is not the case that Southerners necessarily have longer (drawn out) vowels overall than speakers in other regions, but that some traditional short vowels are produced as long vowels for some speakers. The VIA project, in addition to examining shift patterns, also compares vowel duration across speakers and dialects to look more closely at what speakers are using as social and linguistic signals during vowel production.

Finally, Western speech is perhaps better characterized by what it lacks rather than what it has, and we have much less historical and contemporary research on this region. However, recent research in the West points to some changes that appear to characterize this region, namely an extensive low back vowel merger (called the cot/caught merger) and some retraction (or backing of the tongue during articulation) of the short front vowels (in words like bed and bad). These changes make speech in the West sound different from speech in the other regions, with, for example, a stark contrast in how a word like “bad” would sound in the West versus the North. Though sometimes referred to as the California Vowel Shift since that is where it has been mostly studied, these changes are similar to those that have been found in parts of Canada, where it is known as the Canadian Vowel Shift. 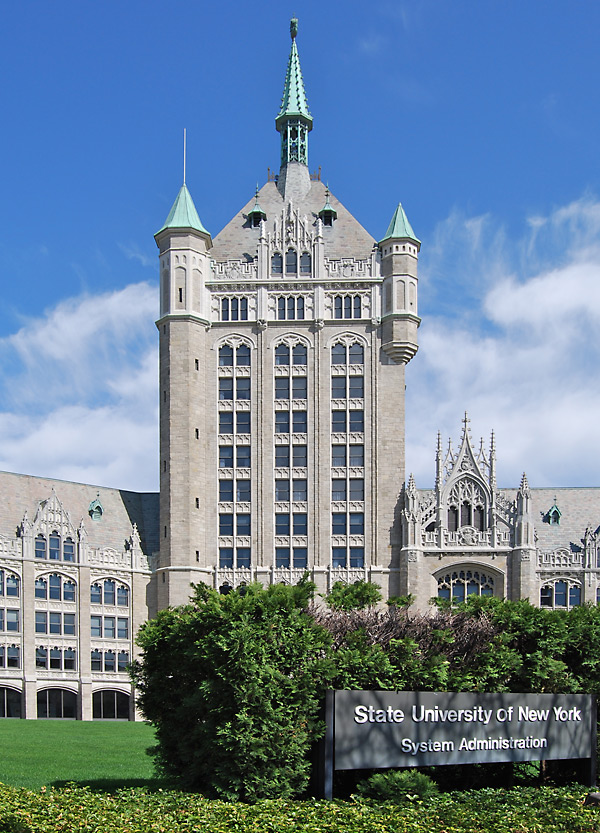 VIA project results have the potential for a broader impact

Studying perceptual differences is important in determining whether non-native or non-standard speakers in American educational systems may experience difficulties in how they are understood by a local native speaker, and how these challenges are magnified by the limited resources for learning to speak English – especially in pronouncing the American dialect recognized as local.

If social differences such as race, gender or region are shown to bring about different perceptual ranges as well as productive ranges, the findings have implications for many of the teaching methods used in classrooms, especially as the educational climate becomes increasingly standards-based.

The VIA project results also have the potential to impact future computer-generated speech production and voice recognition technologies, because more will be known about speech perception.

The three parts of the project together address central themes involved in theories of language change across diverse communities, regions and through time. To view the VIA project’s results, please see the Findings menu tab. 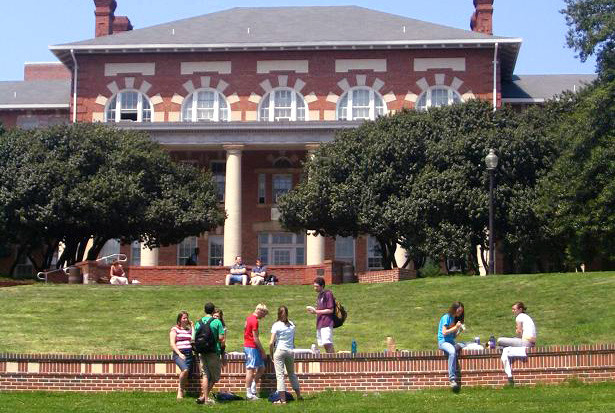 Upper portion of the Court of North Carolina and the 1911 Building at North Carolina State University. Photo by Seth Ilys, released to Public Domain on Wikimedia Commons.

Upper portion of the Court of North Carolina and the 1911 Building at North Carolina State University. Photo by Seth Ilys, released to Public Domain on Wikimedia Commons.